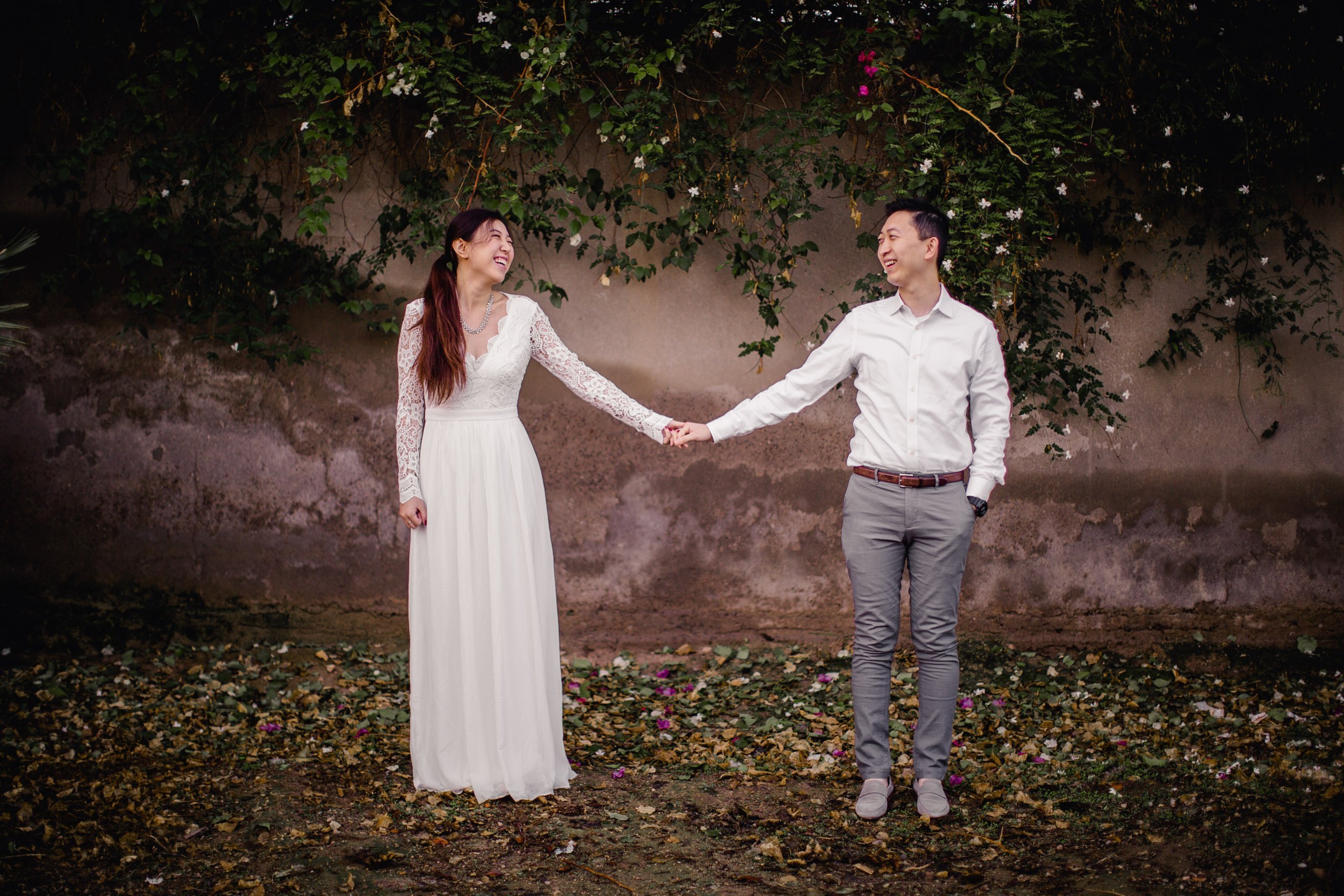 There was so much to love about Kai and Alice’s medina and palmeraie photoshoot in Marrakech! For one, it combined two of our favorite Marrakech trademarks—the Palmeraie and the medina. Secondly, their photoshoot felt like time with friends. Thirdly, well, just look at the photos! This adventurous couple is up for anything – including an early morning photoshoot with some feisty camels.

These two met in university and after five years of dating, they will be tying the knot in February. They will also have celebrations in their hometowns in China. After hearing from friends about the magic of Morocco, they decided to take a break from wedding planning and holiday in Morocco.

We loved Alice’s idea to juxtapose their wedding-themed outfits with the desert like vibe of the Marrakech Palmerie. We were even more thrilled that Alice brought along a veil to complete the look.

The Palmerie in the early morning is positively magical. Kai and Alice are completely smitten and needed no encouragement from us to cuddle. As the sun began to rise, we added a camel to complete the desert look. As we were about to leave the shoot we discovered that Alice’s ring had fallen off her finger at one point during the shoot. This led to a beautiful, spontaneous moment. After a few minutes of searching, Richard found the ring and secretly gave it to Kai. Kai then surprised Alice by proposing to her all over again. You just can’t plan these intimate moments!

Alice and Kai made an outfit change into traditional Moroccan attire and we headed into the medina. Alice had henna done the day before to complete the look. Even in Marrakech, Sunday mornings are pretty lazy and we loved having the tiny empty streets to ourselves. The Marrakech medina is full of unique spots for photos, from intricate doors to colorful rugs to quintessential Moroccan red walls.

We wish these two all the best for their upcoming wedding in New York!

Heading to Marrakech on holiday? Contact us to photograph your time in the red city!

Medina and Palmeraie Photoshoot in Marrakech

Thanks for visiting us!

Unfortunately we are no longer in Morocco and are taking a break from wedding photography.

We want to thank all our couples over the years who we have had the opportunity to capture their special love stories! We feel so honoured to have been apart of your special day!

For us we are taking a break and returning to North America for a period of time, after that we intend to move to Italy (Lord willing).